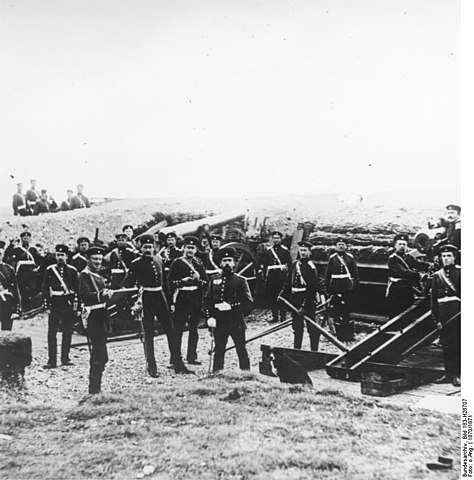 The Norwegian 18-bore kammerlader rifles were continually improved from the first model was adopted in 1842. In 1860 a new model with several radical changes was adopted. The most important difference was the reduction of the calibre from 18 bore to 4 decimal lines – which translates to 11.77mm or .463". The calibre was thus reduced with approximately 5mm or .2".

The conventional rifling was replaced with hexagonal Whitworth rifling on the Model 1860. Now the chamber was rifled was well. Because of the smaller calibre, the Model 1860 was considerably lighter and slimmer compared to the old 18 bore models.

Find out more!
You can learn more about the kammerlader rifles in the book From Musket to Metallic Cartridge: A Practical History of Black Powder Firearms.

Kongsberg Våpenfabrikk produced the Model 1860 for both the Army and Navy as well as for civilians. The Army rifles were produced in two lengths: short and long. The lengths were identical to the short and long 18 bore infantry rifles. As before, the short rifles made for jägers, light infantry and non-commissioned officers had two brass bands and a sword bayonet, while the long infantry rifles had three brass bands and socket bayonets.

Some of the rifles that shot the tightest groups during the sighting in were equipped with sharpshooter sight with graduations up to 1500 ells (941 metres or 1030 yards). The rest got the regular sight called ‘vinkellamellsikte’ which had openings for distances up to 750 ells (471 metres or 515 yards). About 12,000 rifles were produced in total and about 75% of them were long.

There are four different patterns of the Model 1860 Army rifles:

The Navy were issued 1400 short Model 1860 rifles – most of which were equipped with socket bayonets. However, some were also delivered with sword bayonets identical to that of the Army. Like the Army rifles, the most accurate had sharpshooter sights installed.

Drawing of the most common Naval Model 1860 pattern with 'vinkellamellsikte' and socket bayonet lug.

The Navy used the following patterns of the Model 1860:

A trial carbine with approximate 12mm (.47") calibre was adopted for the cavalry in 1857. When the 11.77mm infantry rifle calibre was adopted in 1860 it was decided to design new carbines with identical calibre. An artillery carbine approved for trial in 1862 and formally adopted in 1866. The Model 1862/66 artillery carbine was equipped with sword bayonets.

Cavalry carbine Model 1865 was almost identical to the artillery carbine but did not have bayonet.

In total 1400 of the Model 1862/66 and Model 1865 carbines were produced. This page allows you to search for your cavalry or artillery carbine (only in Norwegian).

While the Navy issued the new rifles immediately to sailors on board the war ships, the Army never issued their rifles the troops – except for some special units, such as the Norwegian Sharpshooter Company in Stockholm. In 1867 the Army decided to convert the Model 1860 rifles to fire the same metallic cartridge as the newly adopted Remington rolling block rifle. The metallic cartridge conversion was invented by rustmester Jacob Gabriel Lund and the rifles were named ‘Lund rifles’. After the conversion they were designated Model 1860/67 Lund.

Almost all the 12,000 Model 1860 rifles were converted, and unaltered Model 1860 rifles are virtually non-existent. Kongsberg also produced factory new Lund rifles. These are designated Model 1867 Lund rifles. The Navy converted 514 of their 1400 rifles to Remington rolling block from about 1868, but the conversion proved too expensive. Therefore, it was decided to convert the remaining to a system invented by director Jens Landmark at Kongsberg Våpenfabrikk. The Navy conversion is called ‘Landmark conversion’ or simply ‘Landmark rifle’. Original percussion navy rifles are non-existent today.

The Lund carbines were chambered for a slightly shorter 12mm cartridge called 12 x 29.

In the beginning of the 1860s, Kongsberg Våpenfabrikk got permission to produce rifles for the civilian shooting society movement. The Model 1860 won an international shooting competition in Belgium that compared a wide range of rifles intended for Belgian volunteers.

The factory also made between 250 and 400 full-stock rifles. These were more expensive than the military pattern rifles.

Custom made mould for 11.77mm kammerlader.

If you find a small-bore 11.77mm calibre which is not converted to metallic cartridge, it is most likely a civilian rifle. Because of the scarcity of these rifles, they are rarely used. The Model 1860 was loaded with a paper-patched hollow base bullet. In many respects it is a downsized version of the British .577" Pritchett-Enfield bullet. Moulds for the Norwegian Model 1860 kammerlader is not produced today, som the only opportunity is to have someone make a custom mould or use original moulds.

The load was first 80 grains of rifle-grade black powder, but the load was soon reduced to 75 grains. The Army and Navy used paper cartridges of the same type as the 18 bore Model 1861 cartridge (basically the same as the .577" Enfield cartridge). However, civilians often used paper patched projectiles and measured powder charges. Swaged bullets were readily available over the counter – either patched or unpatched. Another option is to use minié balls, for example, bullets made for the Swedish Model 1860 ‘Wrede’ muzzle-loading rifle or Danish shooting society rifles.

You can read more about small-bore kammerlader rifles in From Musket to Metallic Cartridge: A Practical History of Black Powder Firearms or in the Norwegian kammerlader book.