Gilbert you Motier, Marquis de La Fayette, decided to join the US Army. He became convinced that the American cause in its revolutionary war was noble, and travelled to the New World seeking glory in it. There, he was made a major general, though... Read more ...

Marquis de Lafayette joined the US Army
Gilbert you Motier, Marquis de La Fayette, decided to join the US Army. He became convinced that the American cause in its revolutionary war was noble, and travelled to the New World seeking glory in it. There, he was made a major general, though initially the 19-year-old was not given troops to command. Wounded during the Battle of Brandywine, he still managed to organize an orderly retreat. He served with distinction in the Battle of Rhode Island. In the middle of the war, he returned home to lobby for an increase in French support. He again sailed to America in 1780, and was given senior positions in the Continental Army. In 1781, troops in Virginia under his command blocked forces led by Cornwallis until other American and French forces could position themselves for the decisive Siege of Yorktown.

Lafayette returned to France and, in 1787. After the storming of the Bastille, Lafayette was appointed commander-in-chief of the National Guard, and tried to steer a middle course through the French Revolution. In August 1792, the radical factions ordered his arrest. Fleeing through the Austrian Netherlands, he was captured by Austrian troops and spent more than five years in prison.

Lafayette returned to France after Napoleon Bonaparte secured his release in 1797. Lafayette died on 20 May 1834, and is buried in Picpus Cemetery in Paris, under soil from Bunker Hill. For his accomplishments in the service of both France and the United States, he is sometimes known as "The Hero of the Two Worlds". 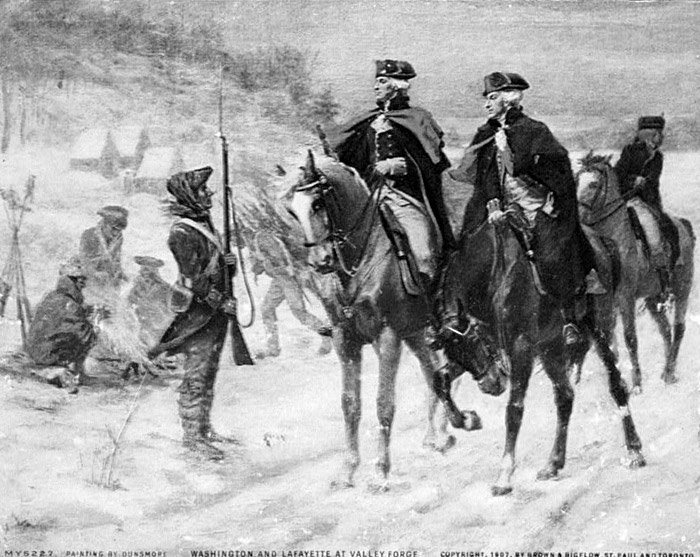 The smoothbore military flintlock musket was the standard infantry firearm for hundreds of years before the percussion muskets and breech-loading rifles took over from the mid-1850s. The Norwegian Army received muskets from Denmark during the union years, but after the union with Denmark fell apart and another union was established with Sweden in 1814, the Norwegians started their own firearms production at Kongsberg. A typical Norwegian-Danish musket looked like this:

Find out more!
You can learn more about the history and practical use of smooth-bore flintlock and percussion muskets in the brand new book From Musket to Metallic Cartridge: A Practical History of Black Powder Firearms.